duckduckgo.com is typed in the URL (Uniform Resource Locator or web address) bar and the Enter key is pressed. 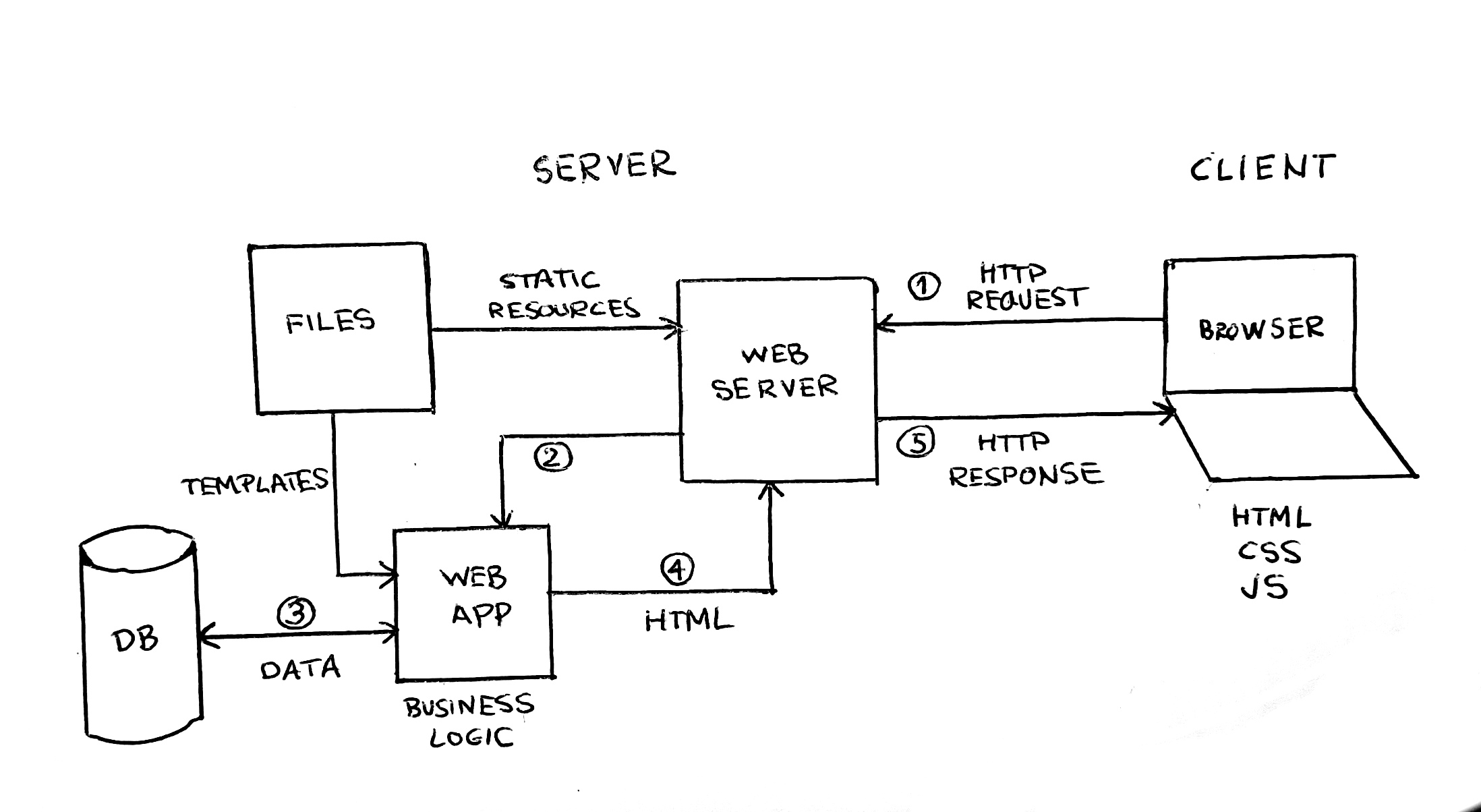 The browser requests files via HTTP (Hypertext Transfer Protocol) from the server, then the server accepts the request and always sends a response back to the browser via HTTP, at least will send an error message. Resources such as HTML documents are fetched and sent over. A TCP (Transmission Control Protocol) connection must be established first. Usually a browser is the one that initiates a request.

The browser sends a request to a DNS (Domain Name System) to look up the domain duckduckgo.com and get back the IP address (Internet Protocol address, a numerical label assigned to each device connected to a network) for that domain. In this case 176.34.155.23 is returned to the browser.

DNS is just a key/value lookup for domain names and their IP addresses, it’s like the contact list from your phone, which links names to phone numbers.

A connection is established through TCP on port 80, at which point, a request can be sent to the server over HTTP.

A TCP connection must be established before a server-client exchange can happen. When a TCP connection is opened, a message is sent over HTTP, then the browser reads the response the server sends back, the connection can be closed or renewed for another request. The message sent over HTTP has different format: HTTP Request and HTTP Response.

This request will be a message indicating the wanted action for the resource that needs to be fetched.

The request will have a method (GET, POST, DELETE), which is what kind of action will be performed, the path (/index) of the resource; without protocol, domain, or TCP port. It also contains the protocol version (HTTP/1.1) and optional headers or body.

Request methods (rfc7231) indicate the wanted action for a resource, they are also known as HTTP Verbs.

There are other components in between the server and the browser, multiple layers that can perform different functions and are usually called proxies: authentication, caching, load balancing, etc. There could also be a CDN, which serves static assets faster by being distributed servers around the world. The assets will be served from a shorter distance rather than the original server.

The message will be encoded and sent over to the DuckDuckGo web server, which looks up and prepares the resource needed for the response.

The web server stores software and files (HTML, CSS, Javascript, images, etc.). The software, HTTP server, controls how these files are accessed by users through requests. It understands URLs (addresses) and HTTP (protocol).

At this point a web application could query a database or cache might help avoid that, and will generate data for the response, which is sent back.

A web application executes business logic and is usually built using a framework. The framework will generate code to make it easier deal with requests and responses, access data, abstract database access using ORM, which is just a mapper for the underlying database, it also can use templates to generate documents. It can also provide security against attacks: XSS (injects client side scripts to perform attacks), SQL injection (execution of unwanted SQL code), CSRF.

A server can serve static or dynamic content. Static is served “as-is” while dynamic, usually, the content is generated by a web application with the help of a database.

There will be some caching for common queries to avoid extra computation. There might be job queries, which run actions asynchronously.

The response is received by the browser. It starts rendering the page and might ask a CDN (Content Delivery Network) for stylesheets, images, etc.

A response will have the protocol version, a status code (200, 404, 500) which shows if the request was successful, a status message, HTTP headers and an optional body containing the resource.

The web browser is a user-agent, a tool performing actions for the end user. An HTML document is fetched and parsed, then all the additional assets, like scripts, stylesheets, and other content, images for instance.

Once the rendering is finished the website will be ready for the user.

Getting started with a Django project

Feedback is appreciated. Please drop me an email if you’ve spotted any mistakes, grammatical or misspellings, something is unclear or have questions and/or suggestions.